Here’s a couple of sweet dishes which can double up for dessert and breakfast.

I tried out the a new shortcut to an old bibingka (rice cake) favorite today and I must say, it didn’t turn out half bad at all! This glutinous rice cake is called Bibingkang Malagkit in Tagalog but in Ilocano, we usually call it Inkiwar which roughly translates to ‘something stirred’. When my grandmother used to make this rice bibingka, it usually … Read entire article »

The Girl (my youngest daughter) has been on a bread making spree this summer as she also worked on perfecting her pizza. She made four more loaves of bread yesterday so today, I took the half loaf left over from last weekend’s bread making session and made this baked french toast which my husband says is the same thing as … Read entire article »

I love Yucon Gold Potatoes! It’s almost the only potatoes I ever use in the kitchen anymore. I may buy the occasional red or white potatoes especially if they’re on sale or if a particular recipe calls for them but my go-to potato is the yucon gold.

It could be a bit pricey at times but I think it’s worth it. The flavor is so much richer and who can resist that pretty golden color!

Here’s a couple of recipes using these golden potatoes. Perfect now that the weather is again cooler.

This is one of our favorite soups, oxtail soup. It is a very simple soup packed with flavor and vitamins. It is a very versatile soup and you can change up the type of vegetables you add to it. If oxtails is not your thing, you can use another cut of beef to your liking (beef short ribs is very good for this dish). My eldest daughter loves oxtails though, and this is one of the favorite ways she likes it.  … Read entire article »

This is based on the Filipino Afritada recipe which my family has gotten to simply calling chicken stew. Which, basically, is what it is. I like it because, well, you can only have fried chicken so often (their favorite), and this has both starch and vegetables and a hearty gravy all in one pot so it’s perfect … Read entire article »

The ‘chicken spaghetti’ as my daughter calls it! You can have a fancy name for any dish, but kids alway have a way of calling it like it is, don’t they? 🙂 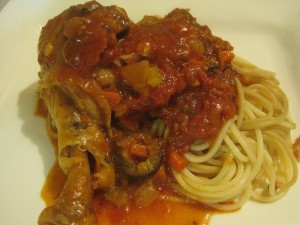 I do love to cook, and I do love to try out new things. Lately though, it’s been a stretch to accomplish either of those things. I guess you can tell from the frequency of my food posts. Take for instance, chicken. I have been having such a love/hate relationship with chicken especially as some people in my house think that chicken should almost always be fried. Well I couldn’t stand to fry another damned chicken … Read entire article »

Personally though, I would probably have had more respect for Paula if she had just told everyone to “Kiss my grits!”
END_OF_DOCUMENT_TOKEN_TO_BE_REPLACED

We went to Walmart this past weekend and while there, I decided to check if they had any Olivari Olive Oil. I received some coupons and a sample of the Extra Virgin Olive oil for the giveaway that I’m hosting on my food blog and their literature says that they also make flavored olive oils. So that’s what I was looking forward to getting with my coupons, and so far Walmart is the only store that carries this brand. I was disappointed to find though, that the Walmart store we went to only carried the ‘Classic’ Olive Oil. So I got a bottle and held on to my other coupon to get a flavored one when I find it.

If you would like to try Olivari Olive oil, make sure to enter the giveway for this Kitchen Essentials Kit that I am giving away on Cooked From the Heart. Click on the photo above to go to the giveaway post.