My husband is not a writer. He is an orator. He does not leave me daily love notes and I cannot remember any time he’s ever written me a letter other than a card. But not a day goes by that he doesn’t tell me he loves me… And he’s been saying it for 22 years. And every time he says it, it feels like the first time.

“When a guy is happily married, no matter what happens at work, no matter what happens in the rest of the day,” Danny said, “there’s a shelter when you get home, there’s a knowledge, knowing that you can hug somebody without them throwing you down the stairs and saying, ‘Get your hands off me.’ Being married is like having a color television set; you never want to go back to black and white.”

In celebration of our anniversary this weekend, I share with you this touching love story of Danny and Annie. 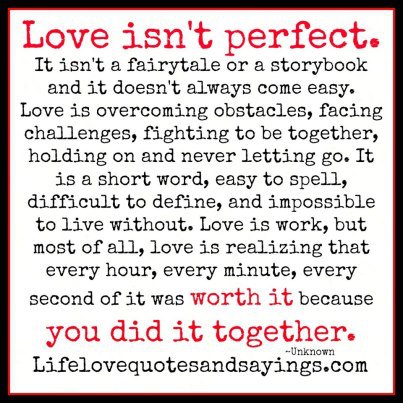 If WE were a person, we’d be of legal age by now. So join us in finally being able to toast togetherness legally 🙂

To the man who has hang in there with me all these years, through all the good and the bad, the highs and the lows; he who always can make me smile no matter how surly I feel and who always managed to put up with me both at my best and at my worst, HAPPY ANNIVERSARY! I love you more every day. Your love has made me a better woman.

It’s always the small events in life that matters the most and I have never felt that more to be true than the past week.

Last week, I received a disturbing message on facebook. Now I don’t usually entertain these type of messages and I’ve gotten pretty good at letting things roll off my back. But this one, it stung a bit because of the nature of it. I tried to laugh it off but it bugged me…

I wasn’t going to say anything about it, but my husband noticed that something was eating at me and so he asked what it is. So I told him.

Someone is jealous of me and claims that I am after her husband. This woman claims that I am flirting with her husband and wants to continue a relationship with him. She also claims that all my facebook updates are directed at her husband. That wouldn’t have been so bad in and of itself but she has also gone around to people who know me (are related to me) and told them her tale and plead with them to please talk some sense into me.

I told my husband the story, a little concerned that he may believe the rumors. You know what he said?
“I have a beautiful and intelligent wife!! It’s natural that they’d be jealous!”

Wasn’t that sweet? But that’s not all. He knows all this is going on around the things I post on facebook. So today, just a few minutes ago, actually, he comments on one of my posts and I just about cried! He never comments on my facebook! We would look at some of the things I post and discuss the more interesting comments at home, when we’re sitting next to each other. No need for us to comment on each other’s walls. But this time, I know he did it to show his support of what’s going on (he usually leaves me to do my thing on fb). I know he wants my fb stalkers to know he’s got my back no matter what they are claiming about me. See, my husband knows me better than anyone else. He knows such claims should be pitied.

So there! You gossipmongers, see if your husband who is supposed to be so wonderful that I would want to take him away from you, is as awesome than the one I have! I’d be insane to want anyone else!

There is a website called Love Gives Me Hope and I never thought I would ever have a story to post on a site like that but I think this story comes pretty darn close!

This post was entered into the It’s a Wife’s Life Blog Carnival. The next carnival will be in September. If you have a wifely story to share, make sure to submit it before Sept. 8 by using the submission form.

These are just a few things I LOVE…

I LOVE my daughters when they are laughing together

I LOVE my sisters when they are laughing together

I LOVE seeing people eat and enjoy what I cooked

I LOVE my nieces when they drive my sister crazy

I LOVE getting lost in a place I have never been

I LOVE tasting something I’ve never had before

I LOVE shoes that look great and fit perfectly

I LOVE sunshine, sunsets and sunrises

I LOVE to see my dad talk animatedly

I LOVE listening to a good story

I LOVE getting lost in a book

I LOVE to see my mom smile

I LOVE a full body massage

I LOVE dessert at midnight

I LOVE to eat. period.

I LOVE to laugh

I LOVE to live

I’m sure many married people have asked themselves this question. At one time I did too.

My answer was: YES, I did marry the perfect person for me. The man I married 19 years ago knew just what I needed when I needed it and how I needed it.

He has driven me to madness but he has also propelled me to happiness.

He made me want to be a better person than I was; although he would have been perfectly happy with the girl he married, he makes me want to be worthy of his love.

He makes me smile. Even at my worst, this man can make me smile. And during the lowest of low moments when nothing could bring forth a smile, he was there to cushion me until I could muster one.

After 19 years of togetherness is our marriage perfect? Of course not. Nobody’s is. We make love but we also make wars. And I’ve learned that it’s all good because it’s what happens in between the loves and wars that truly matters. It’s the mundaneness of living everyday with the same person that is important. It’s the day’s hellos and goodbyes, the good mornings and good nights that matter. It’s the mere words and acts that we take for granted. It’s those that when you make a conscious effort to inject love in the ordinary and actually mean it, they become extra ordinary.

When you say ‘HELLO’, for instance, say it as if you said ‘hello! I am truly happy to see you’. When you say ‘GOOD MORNING’ say it as if saying ‘I am glad to open my eyes and you’re the first thing I see. I am glad to start another day with you and I can’t wait until we are back in this moment again to say GOOD NIGHT.’

To the man who still can make me smile and can still make me feel beautiful as a girl but respects me as a woman and friend, HAPPY ANNIVERSARY. We don’t look the same as when we said I DO but neither would I say ‘I DO’ the same way. Today, if I were asked again to answer, I will say I DO more confidently and ardently because I know what is to come…and I do not regret one moment of what has come to pass.