When I was in college and had a choice between used and new books, I almost always bought new unless the used book was pristine and unmarked. Before that, I didn’t have a choice. I just had to live through the scribbles and highlights of the previous textbook user. If their name was written on the bookplate, and I knew them, their reputation was taken down a notch in my mind. But after high school, I had a choice and I chose unblemished books.

I admit, I don’t like reading ‘dirty’ books. I like to keep mine as clean as possible. Because of that, I keep meticulous notes in a separate notebook. I am not obsessive about keeping a book clean, mind you. I’ve had lapses when I didn’t have anything else to write on and I just had to make a note on the margin or highlight a passage. The reason I didn’t like books that have been highlighted or marked up when I was in school was not due to any OCD tendencies either, I just didn’t want any spoilers. I want to see a passage and say to myself, ‘Wow! that’s highlight worthy!’ When something triggers a question or thought, I want to be the one to jot it down on my notebook or on the margin. I don’t want other people’s mark ups to influence how I understand or absorb or react to any book.

But I found, in the process of reading Extremely Loud and Incredibly Close, that maybe there’s another way of looking at mark ups.

END_OF_DOCUMENT_TOKEN_TO_BE_REPLACED

This is one of my latest favorite read, recommended by my daughter. I loved it so much that I am now on my way to reading all of John Green’s other books. I’m so glad the weather is getting warmer and staying light later! I have more time to read outside now. Have you read any good books lately? Give me ideas what’s good out there.

Book Review: The Fault in Our Stars by John Green 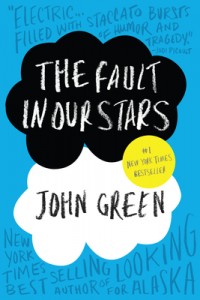 Despite the tumor-shrinking medical miracle that has bought her a few years, Hazel has never been anything but terminal, her final chapter inscribed upon diagnosis. But when a gorgeous plot twist named Augustus Waters suddenly appears at Cancer Kid Support Group, Hazel’s story is about to be completely rewritten.

Insightful, bold, irreverent, and raw, The Fault in Our Stars is award-winning-author John Green’s most ambitious and heartbreaking work yet, brilliantly exploring the funny, thrilling, and tragic business of being alive and in love.

Read what I thought of The Fault in Our Stars by John Green. My review on Found not Lost.

I was looking through the draft posts I have on this blog this morning. Cleaning out some that I know I probably won’t finish or have passed it’s time. If you’re a blogger, you’re probably like me and start draft posts with ideas then come back to it later. Well I had quite a few saved up. Some of them with just a link to something that I may want to write about later, or short notes or sentences that would spur my memory later so I would remember what it was that I thought to write about.

Coincidentally, I found this draft that I had saved two years ago and never got around to finishing it. It was saved July 10, 2008, and this is what I had written so far:

Is it the weather or is it that I have just been too busy to blog? It’s probably a combination of both but I am almost sure it also has a lot to do with the fact that I’ve started my summer reading routine. So nowadays instead of heading straight to the laptop and the bedroom when I get home from work, I take my book outside in the garden along with a nice cool drink and read until the sun goes down or get hungry, whichever one comes first.

It got me thinking whether I should add a little more variety to my life because I am still doing the same thing! LOL! Well, I haven’t been as religious about my reading as I had been. Facebook got me tied to my laptop most of the time and I was just thinking yesterday how I haven’t read much lately. I have been too busy chit chatting on facebook or being nosy and reading about other people’s lives on facebook. Yeah, I’m addicted to facebook just like I was addicted to blogs. I can’t stay away from it! So much so that I have let blogging fall by the wayside and the same thing with my blog hopping. I don’t visit as many blogs as I used to since now I get to interact with those same people on facebook! How about you, are you on facebook yet? Are you addicted too?

This weekend though, I’ve made a pact with myself to be more regular about my reading and blogging. Especially my blogging obligations. I have agreed to read and review several books and I am awfully behind. Months behind, actually. So today, I am turning over a new leaf and this draft post from two years ago just reminded me.