whoa! RT @jmom: Watching the Staircase (Peterson trial documentary) on Sundance channel and husband’s art work is in the background!

It’s true! I was watching the documentary last night while the hubby was snoring as always. Then all of a sudden, I saw one of his prints on the wall of the Peterson house!

I had to wake him up to show him. lol! Thank goodness for the DVR, I was able to rewind it for him. I should have taken a screen shot. It’s a print of his Durham’s 5 Points drawing that the Peterson’s bought at an auction a few years ago. I remember meeting them at that event. Who knew years later he would be accused and convicted of killing her? 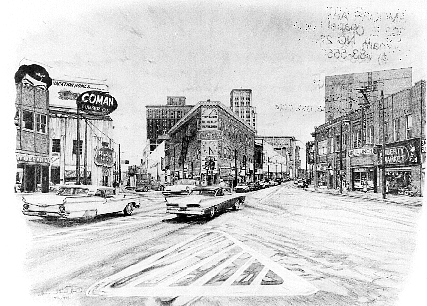