Do you remember what you were doing two decades ago? Well, almost two decades. I do! I remember exactly what I was doing 19 years ago.

19 years ago, I was huge as a house! No, really! I was so big, I could hardly move. 11 months after my first baby, I was delivering my second. Yeah, crazy, right?

It was a crazy time, it was exhausting, but it was also the most rewarding and joyous times. Ah, I miss having babies.

Now, she is a young lady and still screaming for attention even when she’s not trying. 🙂 That’s just the kind of young woman she is. She’ll make your head turn even if you don’t mean to. And don’t let her flash a smile at you, you’ll be sunk for sure. And if you ever get a chance to talk to her, you might as well have heard the sirens sing. You won’t be going anywhere else.

Everyday since she was born, she’s made us proud. Even then, as a new born she garnered attention as people came to gaze at the biggest baby at the nursery that day. lol! I supposed we should have realized that omen was just a taste of what was to come. She commands just by BEING. 🙂

That I love you, is a given. That you are my daughter, is a blessing that I am thankful for everyday.

Today is my youngest daughter’s 14th birthday. We are not having a birthday pary. She doesn’t even want us to sing to her! I suppose she is now officially a teen ager. One tradition that we do have for their birthdays that she still wants to stick to is the one that involves food.

Every year on their birthdays, they get to choose the meal. On previous years, when it came time to my youngest daughter’s birthday, everyone else in the house will start dreading the day because they know what is coming. SPAGHETTI!

No, my spaghetti isn’t that awful! It’s just that it’s the Clone’s favorite meal. She requests it at least once a month but especially on her birthday because she knows she’ll definitely have her wish granted. 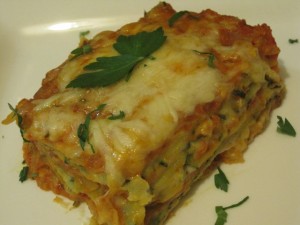 This year though, you can tell someone is getting older because spaghetti did not even come into play. What did come into play though is spaghetti’s more sophisticated cousin, LASAGNA!

This year, she requested Spinach Lasagna, roast beef with lots of gravy and collard greens. Yes, she specified COLLARDS because she was tired of malabar spinach which is the only green that we had a lot of from our garden this year. She didn’t want anymore spinach, well except for the small amount used in her lasagna, so off to the market we went to buy collards.

Her main request of spinach lasagna, we discovered a year or so ago when I participated on a blogging carnival called Daring Kitchen where food bloggers were encouraged to try challenging recipes that they would normally not cook in their kitchen. For this particular challenge, it was making your own pasta, and spinach pasta at that!

The recipe looks a bit daunting, but I assure you, by the time you’ve made this dish a couple of times, it really does get a lot easier. This time around, I was thankful for the girl’s penchant to play with dough. I still haven’t got a pasta maker so was I glad when she asked if she could roll out the pasta! She did a great job, too, even managing to roll out wide sheets that almost covered the whole pan in one whole swoop!

It was also a great way to spend a birthday afternoon together. Fun and satisfying 🙂 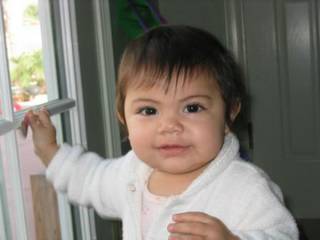 So we are bad Aunties and cousins “Bad, bad, bad, forgetting to send that baby’s card!” (we’re hitting ourselves ala Doby in Harry Potter :)) Ange turned one last week, on Thanksgiving, and we forgot to send her card. I found it in my purse this mornings 🙁 sowwy….

Today is my baby clone’s birthday, she is seven years old! Last year, when she was in kindergarten, we were allowed to bring cake and ice cream to celebrate her birthday. However, this year, her teacher has a policy of no birthday parties. I am a bit glad to hear though that she is not the only one who has this policy. Drstel also had the same situation with her son.

Happy birthday, too, by the way! Anyway, I can understand why they instituted this no birthday celebration policy. Not only are they promoting healthier snacks to curb childhood obesity and concentrating more on academics rather than parties; birthday parties are also hard on the children whose parents cannot or choose not to celebrate their birthdays at school, as the clones teacher pointed out. I can understand this, for even though all the kids enjoy having the extra treats at the time some of them may feel badly when their birthdays come and they don’t have a treat to bring at school for some reason or another. It could be that their parents are busy, they can’t afford it, or maybe their parents are not familiar with this practice.

The later I think is geared more to the growing number of Latino students who are now attending their school. Many of their parents do not speak English and don’t always understand what is going on at school or how things are done. The school system is trying hard to reach these families though, through English/Spanish classes and interpreters during PTA meetings. All the announcements sent home are also bilingual English/Spanish.

Back to the subject of birthdays, the clone’s teacher came up with what I thought was a very novel idea. She asked that I send a list of milestones for each year of the Clone’s life up until now. She has a ceremony to celebrate their birthdays. First, she has the class sit in a circle. In the middle of the circle is a yellow ball, symbolizing the sun. The celebrant, walks around the circle while the teacher recites the milestones in her life so far. She circles the class and the sun, seven times, one for each year of her life. At the end, everyone claps and if they have questions they can ask.

I thought that was a great idea. The Clone sure did like it, and she didn’t even mind that she didn’t have a cake in class. We’ll have a cake for her at home. She has requested her Dad’s famous chocolate cake (thank goodness I’m off the cake making duty!)

Here is what I sent (this was last minute again, I typed it up Friday morning before she went to school, so I probably missed something or could have probably thought of something more fitting if I had taken more time):

1997 – Grandma Virginia came all the way from California to witness her birth. Her whole family was so happy she was born that they had a big party to welcome her, and she received lots of gifts.

1998 – The Clone’s first birthday was celebrated at the state fair in Raleigh. She can walk by then, but she was too little to walk around at the big fairground, so she rode in the stroller. She loved Teletubbies, and her favorite one was Po, the red one who was the smallest one like herself. Her Aunt Jackie made her a Teletubbies birthday cake. (This part, embarassed her. She said she could have done without the mention of Teletubbies. I guess she is growing older.)

1999 – When she was two, she experienced going to school for the first time by visiting her sisters at their class during parties and special events. She even went on their field trips!

2000 – The Clone and her family welcomed the new millennium at her Dad’s new studio in downtown Durham. By this time, the teachers at her sister’s school knew her so well that they let her spend the day in class. She loved big kids school!

2001 – The Clone spends her summer vacation in California with her grandma and grandpa, for the first time without her mom. Her grandpa took her and her sisters fishing.

2002 – The Clone wanted to go to school so bad because she wanted to learn how to read. But she was too young to go, so she went to pre-school at La Petite Academy where she started learning her letters.

2003 – The Clone starts Kindergarten at EK Powe in Ms. Prince’s class. Her sister Jade was in 5th grade so they rode to school together.

Since her birthday is in October, we have had a halloween themed party for her, and we’ve also gone to the fair on her other birtdays. This is a picture from her third birthday party, which was a costume party. My girls all decided to wear their chinese outfits.

I can’t believe they were ever that little!