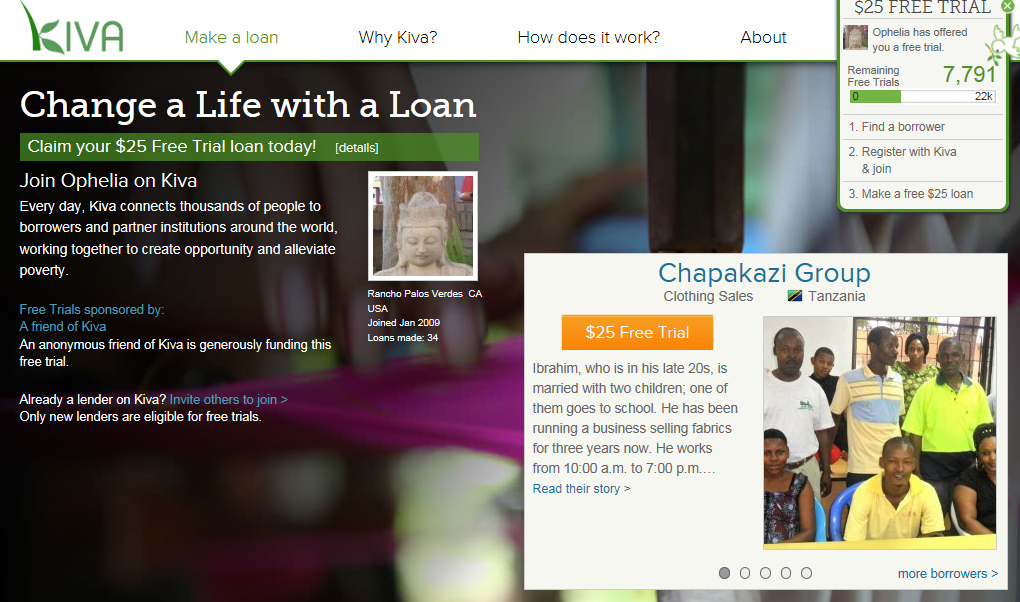 Are you a Kiva lender yet? NO? Then this is your lucky day.

Kiva is an organization that aims to combat poverty by enabling people to help themselves. Kiva lenders are ordinary people like you and me who make small loans to borrowers around the worlds to give them that small boost to get them over whatever hump life may have decided to throw their way.

Often only a relatively small amount of money stands in the way of  Kiva borrowers and their dreams. Whether it’s a Kenyan farmer who needs $500 in order to double her grain production, or a young Bolivian woman who lacks the $1,500 tuition for nursing school, Kiva lenders provide a hand up to these and countless other borrowers.

You can choose from a list of borrowers on the website who you would like to extend the loan to. No matter where or who you choose, you will be making a difference in someone’s life and the best thing about it is, you can do it over and over again!

If you sign up now as a new lender, you can give out a loan for $25 just to try out how it all works. This matching initiative is from other Kiva lenders who have experienced how satisfying and rewarding it is to help someone else get a leg up. Check out Kiva now and join for Free!

A couple of typhoons went through the Philippines a couple of weeks ago and left devastation in their wake. It’s one of the worst storms to go through the country and left many people flooded out of their homes and livelihoods. One of the affected communities is my mom’s hometown in Pangasinan. I posted some photos and appeals for donations for the region on our newsletter, the Sagunto Star.

Just from that small region alone, I know of many farmers and small businesses whose livelihoods were virtually washed away. They have nothing left. Their investments, which were often financed through micro-loans, were flooded out before they could harvest. The full impact of the damage brought on by these two super typhoons, of the same category as Katrina, will be felt for a long time. Even though the sun is shining again, these small businesses will not be out from under the cloud for years.

Kiva.org is an organization that enables small entrepreneurs in developing countries to be able to receive financing for whatever endeavor they may have dreamed for doing but had never had the capital to start up with. Funding comes from individuals who sign on to the site and lend a little of a lot. What’s a little to us in dollars can mean a lot to someone else in a third world country. The basic idea behind Kiva is what that old saying about teaching a man to fish says. Relief goods are fine for the short term but if you enable someone to make a living, you’ve helped them for a lifetime.

HaveImpact.org is a Kiva lender. They have sponsored several entrepreneurs all over the world including the Philippines and they are holding an interesting challenge. They have pledged to donate $5 for every comment people leave on their blog post to Give a Hand to Philippine Entrepreneurs Affected by the Floods. Yes, that’s all you have to do to help. Click on the link and leave a comment. It’s not a hoax, read the updates from the blog author. They are running this campaign until October 31 so please take a minute and go leave a comment.

Even before the campaign is ended, loans have been given out to entrepreneurs. Check out the people who have already received their loans from your comments.