Each year brings about changes; some welcomed, some not so much. Whatever the New Year holds in store for us, I wish you all the very best. Here’s to another year of promise, another year of gratefulness and living life to the fullest. HAPPY NEW YEAR, EVERYONE! 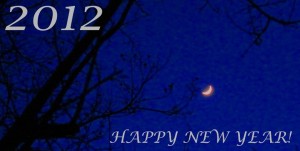 Good thing I didn’t commit to any of the everyday/356 blogging projects going around, because I would have fallen off the wagon already. I really did have the best of intentions to start off this year right. I was going to cook up a storm on New Year’s Eve then stay up all night blogging about it and wishing all my friends well for the New Year. Ah, they were grand plans!

I had such high hopes and I almost pulled it off! I did cook up a storm worthy of the winter wonderland we were blessed with on Christmas. For the New Year Eve’s supper I had lined up a surf and turf meal (ribeye steaks and shrimp scampi) complete with loaded baked potatoes or rice, a huge salad and I forget now what was dessert, but I know we had something. I can’t remember because beyond getting all the food prepared, everything quickly became a faint and hazy memory. See, as soon as I pulled the steaks off the broiler, that damned migraine, the one that I don’t usually have to mess with but once a year, decided to strike before I could put them steaks down and it struck hard! You’d think something jumped out of the oven and hit me over the head!

I heard dinner was great and the girls got to talk to all our family in California via Skype. I heard some mini sausages even got fried into mini-corndogs and they were great.

I wouldn’t know. I was splayed out in bed, my arms over my eyes and wishing sleep would claim me and save me from the torture. I woke up on the first morning of the New Year still with a pounding headache despite several Tylenol pills.

I stayed in bed for most of the day, but I couldn’t possibly let the first day of 2011 go by with me lying in a darkened room and nothing cooked, could I? Of course not!

I dragged myself up and called up my girls who turned out to be troopers. Way to start the year, girls! Between us, we managed to keep the kitchen clean and put together a pretty decent first dinner for 2011.

We baked some cornish hens but not with the sweet glaze or rice stuffing as we did in the recipe posted on our blog. It was just plain roasted like you would a turkey or chicken. By the way, don’t you just love how the six cornish hens fit perfectly in the paella pan?

In addition we also had some cornbread stuffing, black-eyed peas, steamed broccoli and cauliflower, and gravy. Oh don’t forget the canned cranberry jelly! So shoot me. lol! they were good and we found a can in the pantry, so there!

After dinner though, it was back to bed for me and for the rest of the weekend all the way into Monday when I finally got to see my doctor to adjust my meds and all was made well again.

So today is officially my first day of the New Year. I got out of bed with just a trace and fading hint of a migraine, the sun was shining, I got dressed and got to work and nothing disintegrated in my absense. All is good.

Happy New Year! And here’s to more days like today!

P.S. excuse the photos, my daughter took them from her cell phone. It was just too much effort to pull out my camera and plate stuff.

This
Christ-
m a s, I
w o u l d
like to put
up a tree in my
heart, and instead
of hanging presents,
I would like to put the
names of all my friends.
Close friends and not so close
friends. The old friends the new
friends. Those that I see every day
and the ones that I rarely see. The ones
that I always remember and the ones that
I sometimes forget. The ones that are always
there and the ones that seldom are. The friends of
difficult times and the ones of happy times. Friends
who, without meaning to, I have hurt, or, without meaning
to have hurt me. Those that I know well and those I only know
by name. Those that owe me little and those that I owe so much.
My humble friends and my important friends. The names of all those
that have passed through my life no matter how fleetingly. A tree with
very deep roots and very long
and strong branches so that
their names may never be
plucked from my heart. So
that new names from all
over may join the existing ones. A tree with a very
pleasant shade so that our friendship may take a
moment of rest from the battles of life. “May the
happy moments of Christmas brighten every day of
the new year”. These are my sincere wishes.